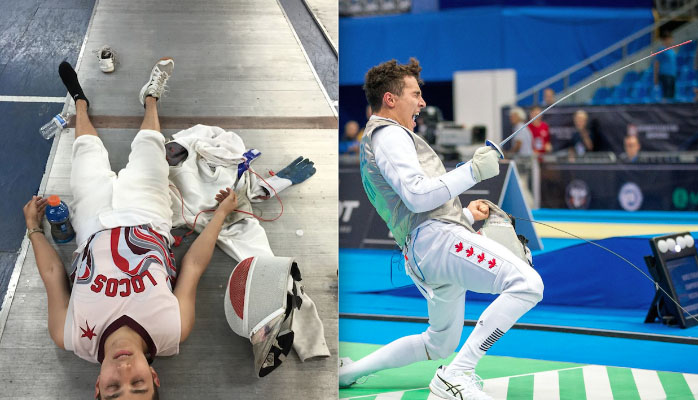 What does it take to beat an Olympic Silver Medalist at your second world championships?

Last week The Fencing World Championships concluded and a friend of mine who grew up fencing at LAIFC was competing in Moscow, with his eye on qualifying for Rio Olympic Games in 2016.

A few weeks before the championships, Eli was fencing each practice bout hard, one after the other with little to no break in between. This was a Monday night and he was all in. Suddenly his legs seized and down he went. "Cramping is not fun!" was the theme that evening. The photo on the left documents the moment after.

Fast forward to Moscow and after a hard fought first day, Eli qualified for the next round and had the following to share:

There were a lot of positive thoughts on his FB page and one in particular from coach Al Carter resonated with Eli and summed it all up:

I asked Eli what was his mindset on that day?

I was going for a serene state of mind. I knew the pressure would be on my opponent since he's basically a star, and I was a true underdog. In last year's Championships, I won 0 bouts and lost 4 of my pool bouts 5-4 so i really just wanted to focus on winning one bout, then the next one, and the next. Anything past the first win was going to be a bonus, so I just wanted to keep the momentum going, and have fun. Once the pressure was off, I was able to fence great by making those small, achievable goals actually happen.

Halfway into the direct elimination bout I started getting scared to commit to actions. Suddenly I was down was 8-14 (first to 15 touches wins), and just focused on each action, rather than the outcome of the bout. I simply did the oldest fencing advice given, 'take it one touch at a time'. So, when I got one, I tried hard for another and another. Then I realized, I can actually win this. I've always believed that if one person can get on a run, so can the other. At this level, so much is mental, since everyone has roughly the same skill set. Once I scored that final touch to win 15-14, I couldn't believe it, (the photo on the right documents the moment after!).

I was thrilled and thanked the coaches and team for their support. I also really wanted to focus on the next bout, but all I could think of was, "I finally get to use wireless gear. Sweet!". I wouldn't recommend that mindset, as I was now distracted by the future and was not in the present against my next opponent.

How does this apply to your career as a designer and entrepreneur. What's the mindset that's needed when working on a project or product that presents a new challenge?

I'd say it's a similar mindset, in that with a start up, we really focus on tackling one project or challenge at a time. Also, in terms of creativity, design and fencing are very similar: it is as important to have good fundamentals, and reliable conservative designs, just as it is to have reliable actions in fencing. What can truly make someone great, is adding creativity to the fundamentals and going crazy when needed. I'd say Miles Chamley-Watson (my training partner and 2013 Men's Foil World Champ) is a perfect example of this.

How doe this mindset apply to a team and how do you get a team to believe in one another when up against a deficit both in sports and in biz?

Team events, both in sport and business, are all about trust. You need to trust your teammates' skills, and know that they can carry you when necessary, just as you carry them. As creative director, my teammates trust in my design choices, even when they might not always agree with them. Similarly, I trust their business decisions even when I don't agree with them. The same goes for fencing: if one of us has a bad bout, we don't get frazzled, since we trust our teammates to pick up the slack.