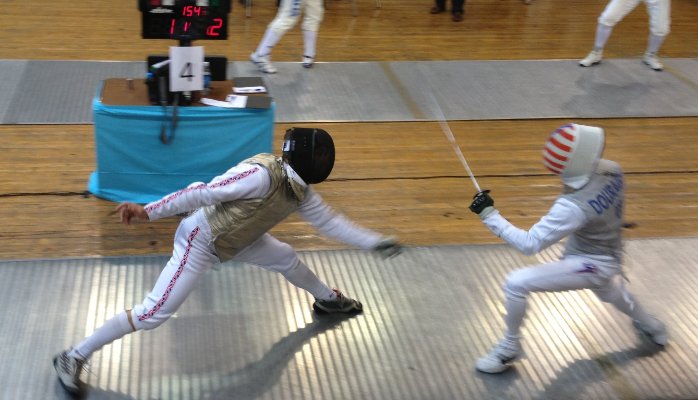 Determination vs. Motivation. Are they the same, or is one stronger?

How often have you found yourself in a situation when you started out incredibly motivated and determined to get something done, then after a while, motivation waned and the drive you had was gone?

It began in 2013 after a decent result at the 50+ World Fencing Championships. I was motivated to make the US team in 2014 and do better. I had a planned out routine to follow: daily, weekly, monthly. At the 2nd of the 3 qualifying tournaments; in the first elimination round, I was down 4-9, (first to 10 points wins) and I could feel motivation waning. At some point, I became determined not to lose. I worked hard to earn each touch, one at a time, in a pressure filled bout to win 10-9. From there I was in flow, focused, won the next series of bouts, and finished 2nd.

As with many sports, the National Championships are the culmination of a year’s worth of training and competing. Amongst the 50 fencers competing, were eight fencers fighting for the two remaining spots to make the team. This was going to be tight. Still motivated to make that team, I fenced hard, won several tough bouts, reached the final 8, then felt a pop in my knee. Determined to qualify, won that bout, had the trainers tape my knee – was now in the top 4, and had technically made the team.

At the onset of the semifinal bout, my motivation to win was suddenly gone. Things felt different, my mind was elsewhere and I was down 1-4. The emotional high I got from making the team was all too fleeting and I felt empty. A good friend shouted: “What’s going on, Jamie!?!”. I paused, asked myself the same question and suddenly could feel a familiar determination physically develop from the inside. So, being “determined”, I fought back, won that bout 10-6. In the finals, I finished 2nd and made the USA 50+ Men’s Foil team.

We are often too reliant on external motivation to get going. What if, we were to shift our perspective to see how far our lives could progress by using a daily determination mindset? What if we were to use it to complete a task at hand; be it that next sales call, getting that deliverable on time to a client, a difficult conversation that needed to be had, or a commitment to our health?