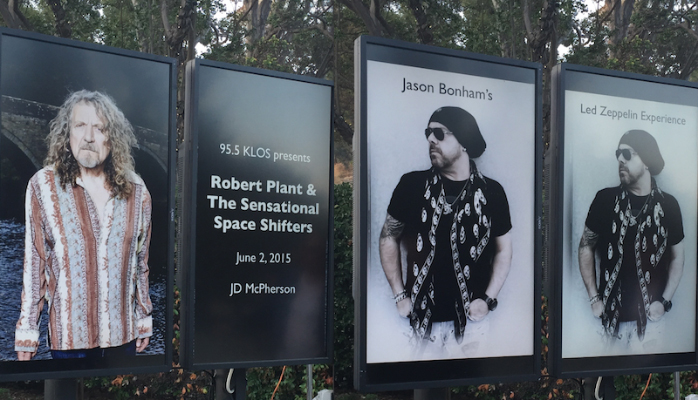 The Song Remains The Same, Or Does It?

What songs trigger memories from when you were growing up and do you look back in fondness or "what if, I only......"?

This summer at the Greek Theater, there were many musicians I remembered fondly from my past playing for present day fans. Two of the acts had roots in Led Zeppelin, and since I attended school in London during the mid 70s, I was looking forward to seeing Jason Bonham's Led Zeppelin Experience. I never made it to an actual Led Zeppelin concert, (though I did manage to see Deep Purple, The Who, Frampton and a few others back then). The second of course, was Robert Plant.

When I saw these images of Robert and Jason, I had to pause and reflect on the moment. Here I was, about to take a trip down memory lane to relive part of my youth, while the next day Robert Plant was performing songs that had less to do with his past, and more about where he is now as an artist.

At the start of the concert, Jason Bonham paid tribute to all Led Zeppelin band members, and prepared to celebrate on a day that would have been his father, John Bonham's 67th birthday. I was ready to be transported back to the London of the 1970's.

The music came at you right out of the gate, lights and visuals were all in synch, and the crowd had energy to spare! Two songs in, I felt disconnected from the cheering crowd and the surrounding music. My mind was playing its own tune of, "well that's really not Robert Plant". I was too attached to my memory of how these songs had to sound. Maybe I should've bought tickets to see Robert Plant perform the next day?

A few more songs in, Jason Bonham shared his perspective, and now I understood why he was up there. This concert was about experiencing the present and not what the past might have been, if only I had.......

Now, his powerful drumming began to permeate. I could feel the band's energy, Jason was playing his heart out and his goosebumps were now shared by all! It was a great show that had me on my feet for the rest of the night.

After the experience, I asked myself:

What drives artists and musicians to evolve, while fans often remain locked in a time capsule?